This healthy, vegan cinnamon roll baked oatmeal can be thrown together in one pan and in less than 10 minutes and makes a great meal prep option! They are full of healthy fats, protein, and fiber to keep you full all morning long. Baked oats are great because they are super versatile and you can really make any flavor you’d like!

Yes! There are baked oat recipes that involve eggs, but this version does not! As for the milk, I opt for a plant based milk, but if you aren’t vegan, you can use any milk you’d like!

Oatmeal: I like to use organic old fashioned oats as they are less processed!
Protein Powder: This is optional but I love adding it as protein helps keep you satiated. If you don’t want to use protein powder, you can simply leave it out or even add in some hemp hearts for a great plant-based protein if you aren’t a fan of powders! I linked my favorite – you can use code “amb-dani” for a discount!
Maple syrup: This will offer a little extra sweetness to the recipe, but you can leave it out or swap it for monk fruit for a lower sugar option.
Flax Seeds: Flax seeds are little superfoods! They are full of healthy fiber which helps keep you satiated (and regular, if ya know what I mean!)
Cinnamon
Banana: This binds the recipe together and offers most of the sweetness. Choose super ripe, spotty bananas.
Milk: I use a plant-based milk, but you can use whatever you have.
Nut Butter: I like using almond or cashew butter in this cinnamon roll baked oatmeal as it really gives it a cinnamon roll flavor. I wouldn’t use peanut butter as it’s a stronger flavor. Sunflower butter or tahini would work for a nut-free option! You can use code “Dani15” for a discount on the nut butters linked!

For the icing:
Cashews:This makes up the base of the recipe!
Maple Syrup
Vanilla Extract
Milk

How you’ll make the baked oatmeal:

It is so simple! You can make it in the pan you plan on baking it in or you can mix everything together in a bowl and transfer to your pan.

First, you’ll mash the banana really well. Then you will mix in the remaining wet ingredients until they are all well combined. Then you’ll stir in the dry ingredients and oats. Then, you bake it!

Do I have to make the Maple cashew icing?

No! The icing is totally optional, but really adds to the cinnamon roll-feel! The maple cashew cream recipe I use for this is great! Cashews make up the base of it and are nutrient dense as well, so I love using them as a healthier option to frosting!

Other Baked Oatmeal flavors you could try:

Berry Baked Oatmeal – Add in a few handfuls of fresh or frozen berries!

Almond joy Baked Oatmeal – Omit the cinnamon and top the oatmeal with shredded coconut, chopped almonds, and some chocolate chips.

Peanut Butter Chocolate Chip Baked Oatmeal: Use peanut butter instead of almond butter and add in some chocolate chips.

Store the oatmeal in an air-tight container in the fridge and reheat when ready to eat!

Sweet Potato Cinnamon Rolls – these are INCREDIBLE and only two main ingredients!

No-Bake Spiced Cake Rolls – a no-bake version of the classic holiday cake roll but made even easier! 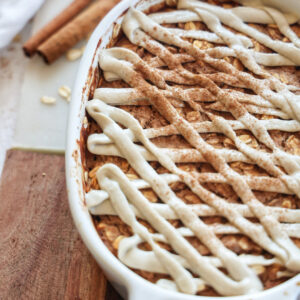 *If omitting the protein powder, I would start with 1 1/4 cups milk at first, adding more if needed.  **The maple syrup is optional! I find it more enjoyable with it. You can sub monk fruit or keto maple syrup for a lower sugar option. ***Any nut or seed butter will work, however I don’t recommend using peanut butter as it’s a strong flavor and won’t give the same cinnamon roll feel! You can sub sunflower seed butter or tahini for nut-free.
Keyword Baked Oatmeal, cinnamon roll, easy recipe, gluten free breakfast, Healthy Breakfast, One Bowl Recipe, One Pan Recipe, Vegan Breakfast 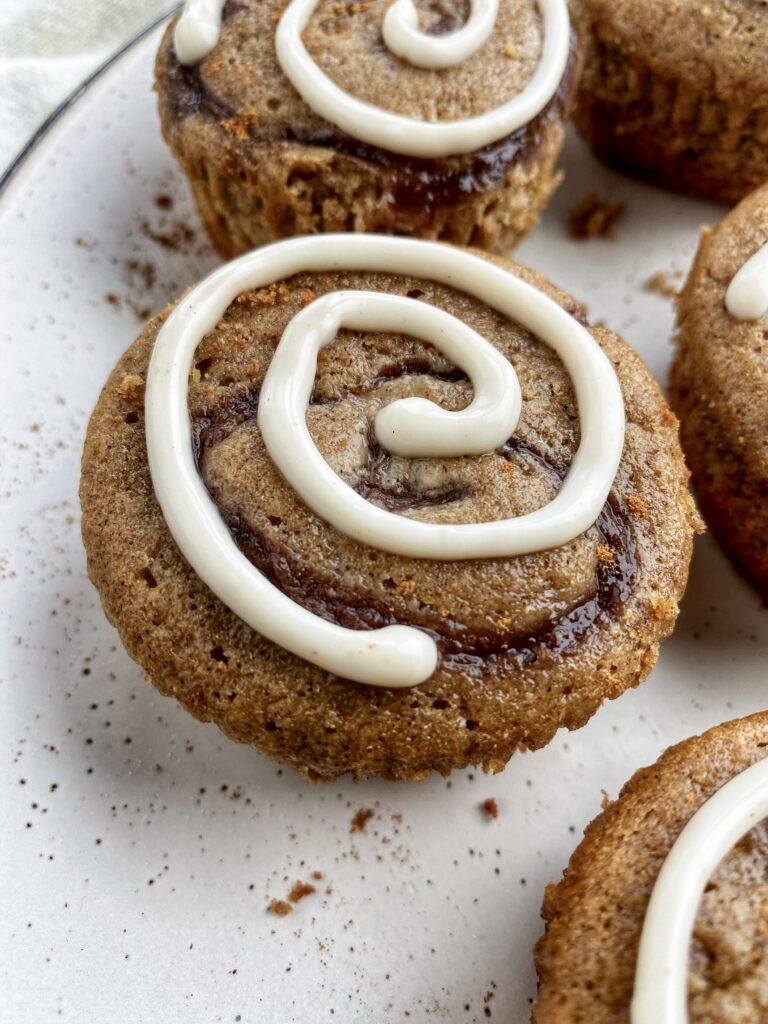 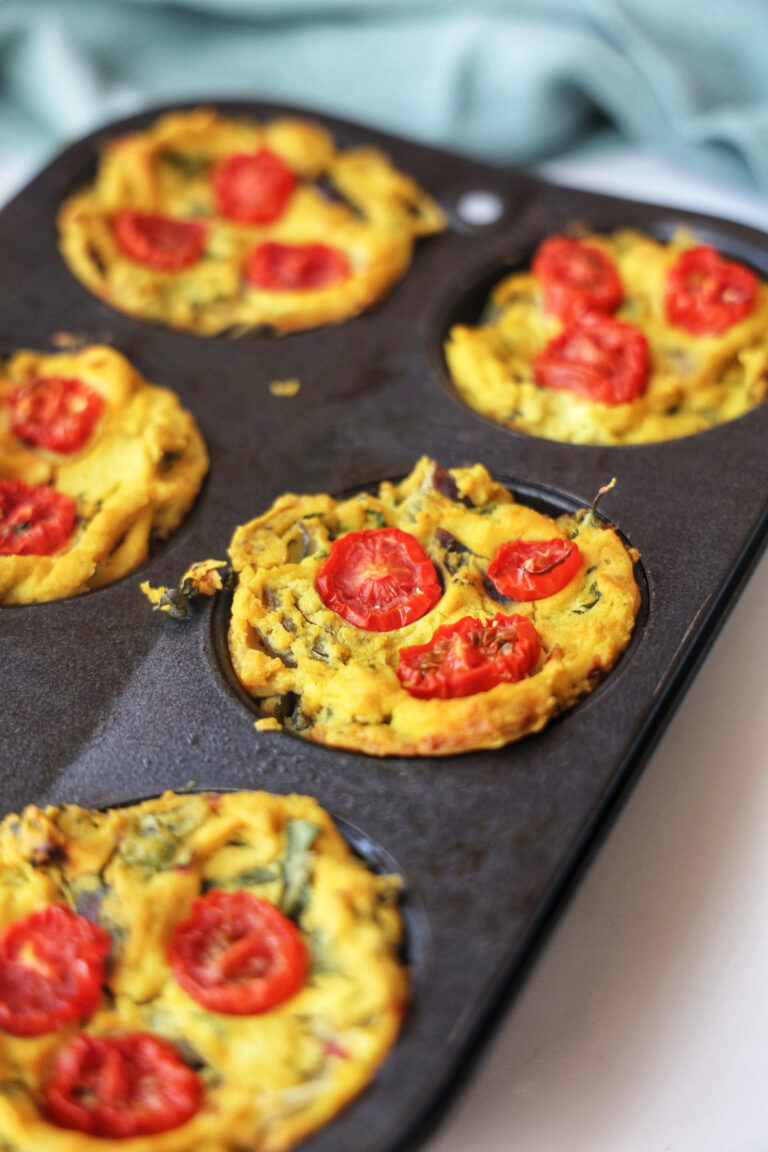 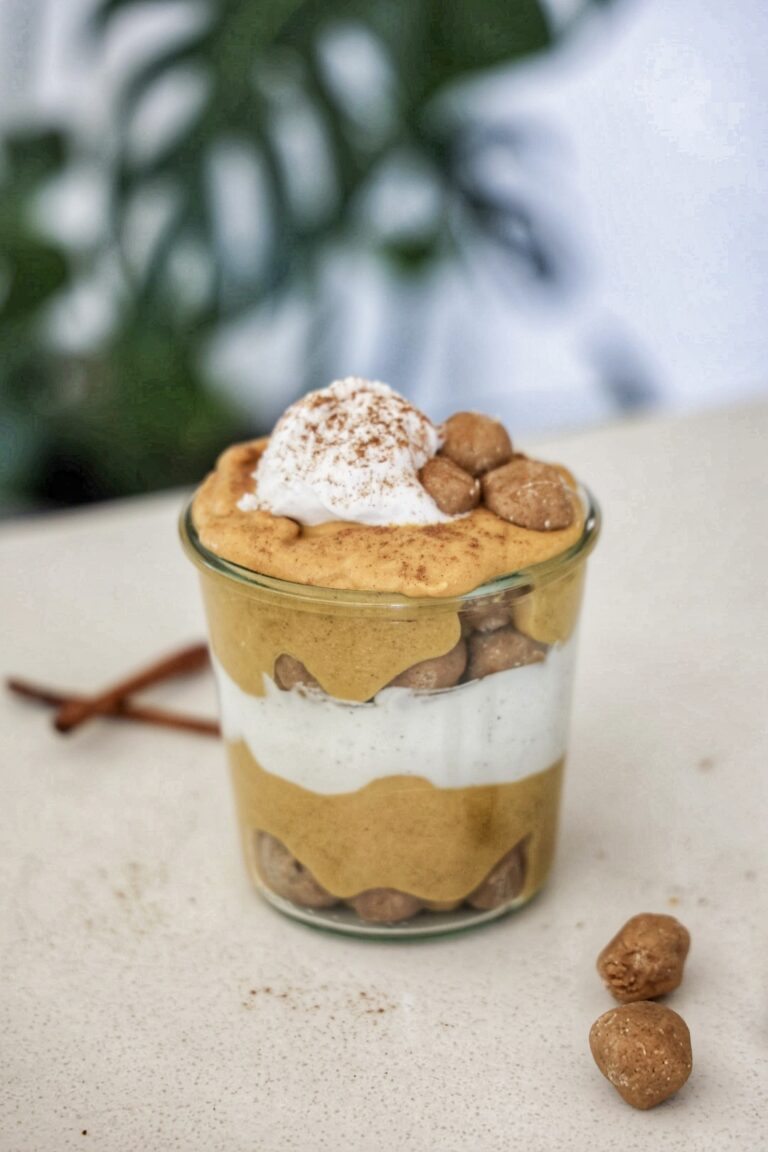 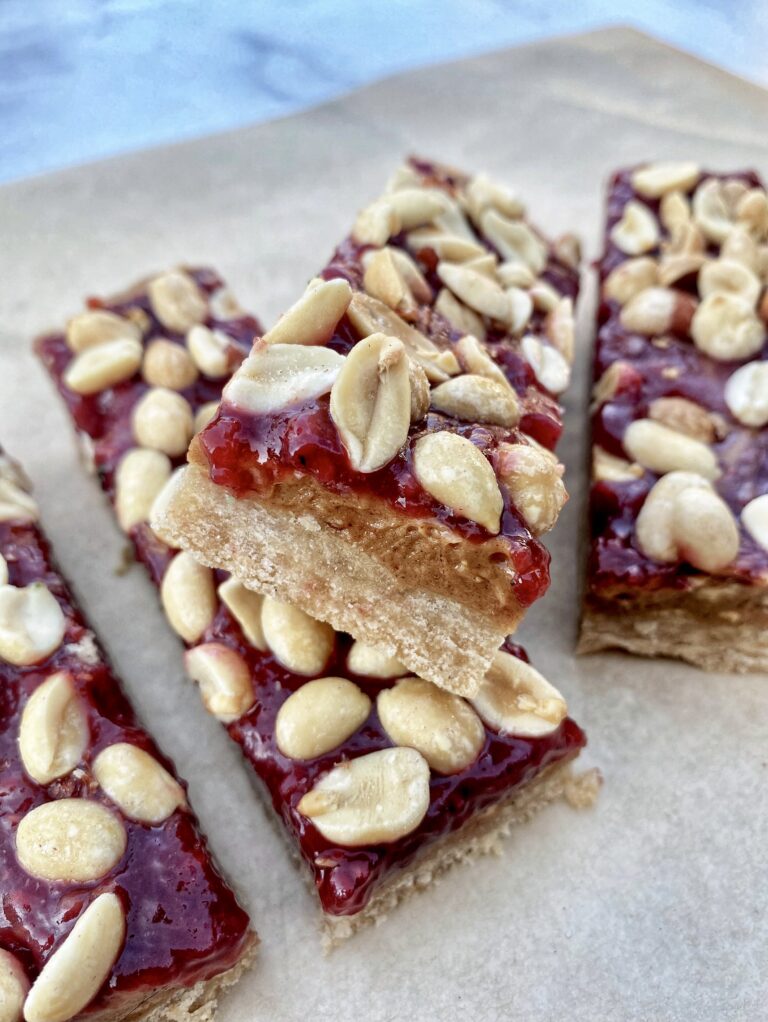 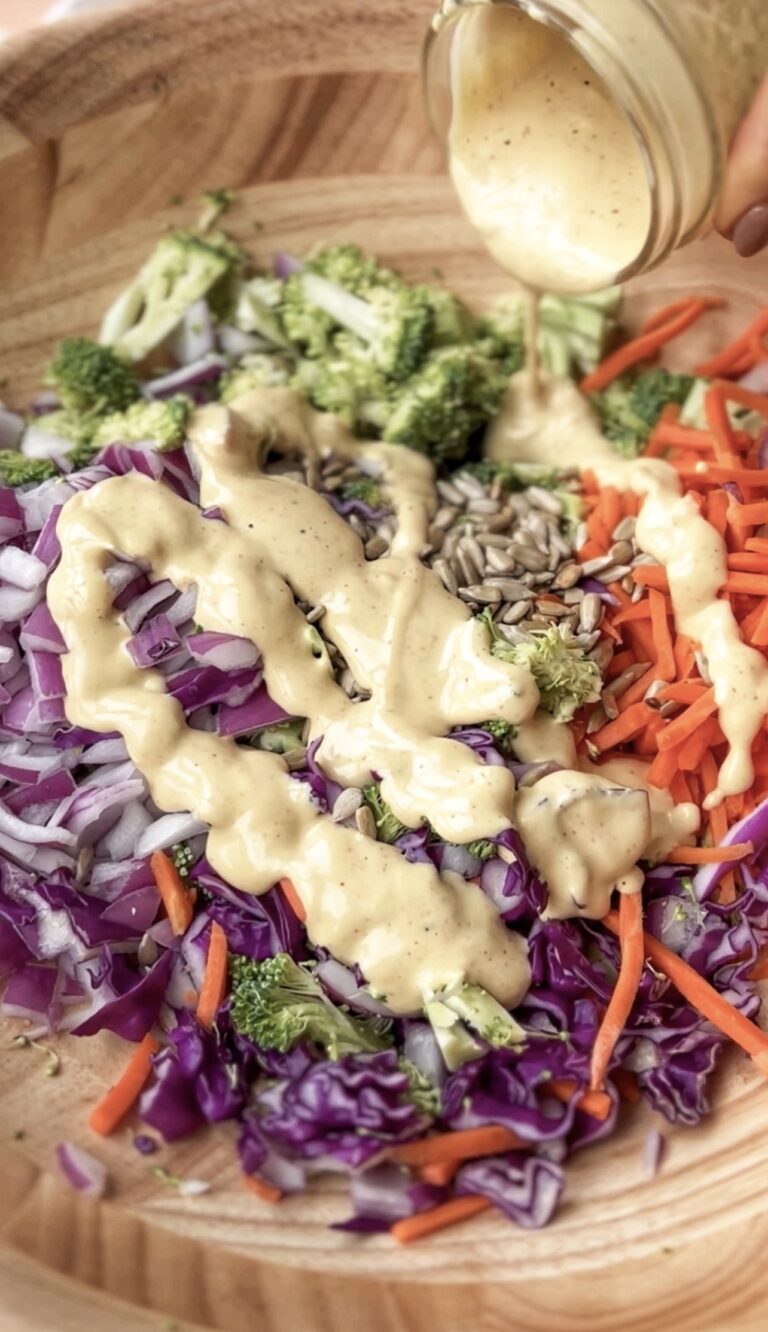 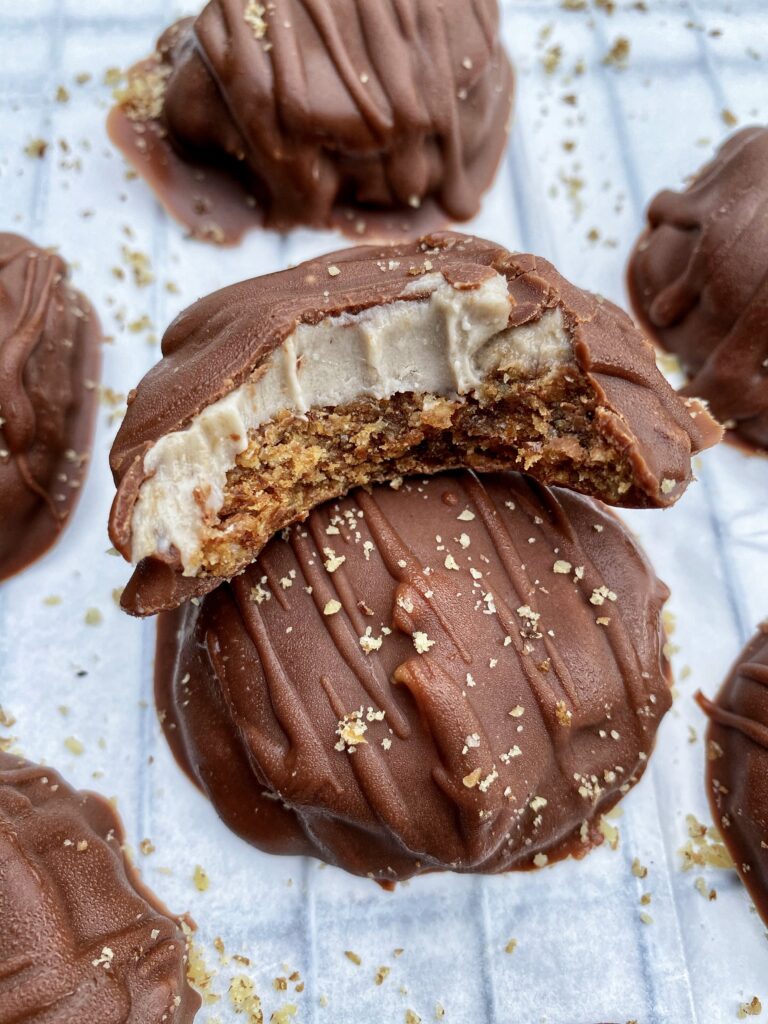